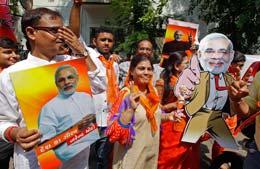 Supporters of India’s most controversial and divisive politician, Narendra Modi, have set up shops in major Canadian cities as the firebrand Hindu leader makes a bid to become his country’s leader.
Modi, the leader of the main opposition Hindu nationalist Bharatiya Janata Party (BJP) and chief minister of the western Indian state of Gujarat, is heading his party’s campaign to win back power in a national election due by next May
Supporters of the 62-year-old polarizing figure say he is an incorruptible and efficient technocrat who has led Gujarat unprecedented growth. His opponents say Modi is nothing more than an extremist dictator and a master of hate-laced politics.
Last week, as his party worked to name him as their prime ministerial candidate, the Overseas Friends of Bharatiya Janata Party (OFBJP) launched a Canada unit with chapters in four major cities -Toronto, Vancouver, Montreal and Ottawa – “to connect with the Indian diaspora.”
The Canada chapter of India’s main opposition party was formally launched by OFBJP global convener Vijay Jolly at a one day forum organized in Mississauga, Ontario, Canada under its “global community overreach programme”.
OFBJP Canada shall focus on improving cultural and heritage links between the people of Canada and India, Jolly said.
OFBJP delegates from Vancouver, Montreal, Ottawa and Toronto attended the daylong meeting at Hilton Garden Inn at Mississauga, according to a media release.
Jolly nominated the following as conveners of the four chapters: Azad K. Kaushik (Toronto), Shivendra Dwivedi (Montreal), Aditya Tawatia (Vancouver) and Shiv Bhaskar (Ottawa.)
Addressing the gathering, Jolly noted that people of Indian origin have played a significant role in development of Canada and for close Indo-Canadian friendship and understanding.
With a population of around 1.2 million in a total Canadian population of 33 million, people of Indian origin have made immense contributions in medicine, IT, commerce, sports, politics, media, social and cultural spheres.
A book titled “Social Harmony” by Modi, was presented to the newly appointed OFBJP Canada convenors.
Modi opponents in Canada, including the Indian Overseas Congress which is aligned with the interestsof India’s Congress Party panned the launch of the BJP chapters saying it was nothing than a front to raise cash for Modi’s bid to prime minister.
If Modi becomes Prime Minister of India, he will adopt the same policy to order Sikhs and Muslims out of India”, thus accelerating the calls for Khalistan (a separate homeland for Sikhs) , among Non-Resident Indian-Sikhs, his opponents in Canada said.
Indian Overseas Congress President Vikram Bajwa in Vancouver feels “tensions will rise with Pakistan, if Muslims are ordered to leave India and go to Pakistan”, and that war is eminent if Modi is Prime Minister of India.
Modi’s Canadian chapters rise as 65 members of the Indian Parliament—some of whom have since backtracked —released a letter they wrote to President Barack Obama urging him to maintain America’s eight-year-old visa ban on Modi.
The U.S., along with England and other Western countries, imposed the ban after human-rights groups implicated Modi in the 2002 massacre of Muslims in his state.The Indian Supreme Court exonerated Modi a decade later, but by then many witnesses had been tampered with or died or killed say some reports.
That year, Hindu mobs—some led by figures from Modi’s own party, one of whom was eventually convicted—went on a revenge spree against Muslims for burning a train with Hindu pilgrims. They razed Muslim homes, raped Muslim women, and killed Muslim men.
However, when asked by Reuters a few weeks ago if he felt any remorse over the grisly events that unfolded on his watch, his response was: If your driver runs over a “kutte ka baccha”—a crude term for a puppy—you would obviously feel regret; it was a statement that simultaneously dodged responsibility and dehumanized Muslims.
The latest scandal dogging Modi involves the killing of a young Muslim woman with alleged links to Pakistani terrorists in a staged encounter with the Gujarati police.
But none of this has fazed Modi’s solid fan base in the majority Hindu population that has made him the opposition BJP’s (Bharatiya Janata Party) standard-bearer in next year’s elections for prime minister.
It has also led to many Western nations, including Canada to court Modi.
On April 30th 2013, Canada’s High Commissioner to India, Stewart Beck paid a courtesy visit to Modi. The visit was intended to increase the scope of cooperation between Gujarat and Canada.
Shikha Dalmia, a Reason Foundation Senior Analyst and a Reason magazine columnist wrote that Modi’s quest for Western recognition is fuelled by his nationalist project to change the perception of Hinduism as a weak religion at home and abroad.
“India’s economic success has given Hindus—especially the urban nouveau riche—a resurgent pride in their religion after enduring decades of digs about India’s “Hindu rate of growth.” They want Hinduism to be seen as the solution to the centuries of mess created by Muslim and British “foreign” rule. They want the world to regard India’s success as synonymous with Hinduism.”
Modi’s recent “Puppy” remarks on the anti-Muslim violence in his state of Gujarat has Indo-Canadians and Indo-Americans fuming said Vikram Bajwa.
Bajwa in a press release said majority of the NRI (non-resident Indians), strongly feel he is the wrong choice of BJP, to lead India.
“Modi should apologize to the NRI’s, India and the world, to set some high standards in Politics of Gujarat,” he said.
He joined over a dozen other NRI Associations, via web and facebook meetings to condemn Modi.
Amin Patel who coordinated NRI-Support for Gujarat, feels let down by Modi.
“He has no place for politics after his “Puppy” elaboration” said Veena Gandhi.
“We’re ashamed of our Chief Minister” said Bharat Patel of New York. – with agencies

Born in the ancient city of Vadnagar in present-day Gujarat into a Hindu family on September 17, 1950, Narendra Damodardas Modi worked in his family’s tea stall, according to a biography.
In 1987 Modi joins the Bharatiya Janata Party (BJP) as the fledgling party taps into the growth of Hindu nationalism across India. The BJP wins a majority in Gujarat in 1995 and Modi quickly rises up the ranks.
Modi gets his big break when Keshubhai Patel steps down as Gujarat chief minister in the wake of the January earthquake that killed thousands of people. Modi is selected as Patel’s replacement and has remained in power ever since, becoming Gujarat’s longest-serving chief minister.
In February, 2002, riots break out after 59 passengers, mostly Hindu pilgrims, die in a train fire in the town of Godhra in Gujarat. At least 1,000 people, mainly Muslims, are killed. Modi, as chief minister, is accused by critics of not doing enough to stem the riots and even quietly encouraging them — allegations he has strongly denied and which have never been proved. In 2012, one of Modi’s former ministers, Maya Kodnani, is sentenced to 28 years in prison alongside 30 others for their role in the riots.
The United State in 2005 denies Modi a travel visa for religious intolerance, causing uproar in India.
In February 2012 a Special Investigation Team (SIT), which has been appointed by India’s Supreme Court, says investigators found no evidence against Modi in a 2002 riots case.
After that Britain, Canada, Japan and the European Union begin courting Modi as the media-savvy politician and an avid Twitter user with more than 1.86 million followers sells Gujarat as an economic engine for India.
Last June Modi is chosen to head the BJP’s campaign in general elections due in 2014, a position that could make him the party’s candidate for prime minister.