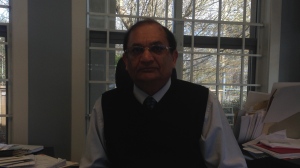 Thousands of people will be put through security checks before they are allowed to hear India Prime Minister Narendra Modi’s speech in Surrey next week.
Modi will visit the Sikh temple on Ross Street in Vancouver on Thursday, April 16.
He will then travel to the Laxmi Narayan mandir, which is a Hindu temple in Surrey.
“We can’t accommodate everybody,” said Vedic Hindu Cultural Society president Satish Kumar.
Vedic Hindu Cultural Society president Satish Kumar (Jesse Johnston/CBC)
“It has to be first come first serve. There will be a scanning system and the scanning will be done two or three miles away from the temple. I know this is a western country and people won’t like it, but those are the instructions from the RCMP.”
Event organizers originally planned for a crowd of 4,600 people at the temple, but Kumar says the number was whittled down to about 3,000 at the request of the RCMP.
Modi will visit Ottawa and Toronto before he comes to B.C. 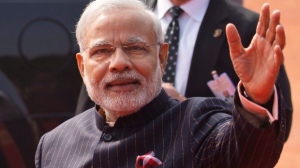 Modi is on a tour, selling his country as a profitable place to do business.
He is visiting France and Germany this week.
“Mr. Modi is a rock star,” said Aditya Tawatia, a Vancouver-based organizer for Modi’s party.
“He is a well-known leader internationally, so we are all looking forward to that. People just can’t wait.”
Tawatia says no Indian prime minister has ever visited Surrey.
Narendra Modi, leader of India’s Bharatiya Janata Party (BJP) (CBC)
“Being Indo-Canadian, that Mr. Modi is coming to Canada and Vancouver, it’s a matter of pride and it’s a matter of happiness in the first year of his tenure,” he said.

Not everyone who turns out for Modi’s public appearances will be there to support him.
The group Sikhs for Justice will be using Modi’s visit as an opportunity to call for a referendum on whether Punjab should become an independent state.
The organization also wants to draw attention to the deadly riots that took place in Gujarat, India more than a decade ago while Modi was a senior minister there.
“He is being treated like a rock star, and I see that term being thrown around a lot, and this is completely against Canadian values,” said the group’s director of international policy Jatinder Grewal.
“We want to highlight this, especially when Mr. Modi will be visiting the Kanishka Memorial site [in Toronto].”

He says there will be several rallies during Modi’s visit.