Vancouver: Overseas Friends of BJP (OfBJP) British Columbia organised a “Talk over tea’ event to galvanize support for BJP led government in India. Aditya Tawatia, president of Of BJP British Columbia chapter said, “We organised this event to discuss the actions we can take to help BJP achieve the target of 272 + seats in the Parliamentary elections scheduled to begin on April 7.” He added, “I believe that being a Canadians of Indian origin this is a high time for both countries to optimize mutual benefits in all the fields.” Aditya credited Praveen Goel, treasurer of OF BJP for actively participating in spreading the awareness about ‘Namo 272 Campaign’. 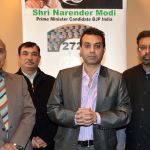 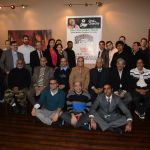 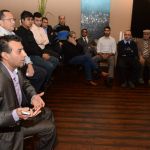 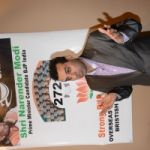 The event was held at Siddharth’s Kitchen located on Commercial Drive, Vancouver. Ash Abhyankar, Business Advisor at JCN Management Consultants and an active and visible community leader with C-level relationships in private and public sector organizations across Western; Paul Brar, who is seeking Conservative nomination from Cloverdale – Langley City; Vancouver based businessmen Manjit Singh Dhillon of Dhillon Holdings, Dr. Birendra Kumar Sahu, a geotechnical engineer; Rajesh Acharya of Summit BIM Consulting; Gagan Grewal, a management consultant and Kamal Kapoor a new immigrant who has business interests in India were some of the attendees. Almost everyone unanimously agreed that if BJP gets a clear majority and Narendra Modi becomes the Prime Minister of India then the trade and business relations between both the countries will become stronger and business community of British Columbia will have more opportunities to do business with rising economy of India and contribute in making the economy of British Columbia stronger and vibrant. Mani Deol Fallon, Regional Organizer Community Relations, Federal Conservative Party also attended the event. In her introduction to the group she said she has come to the event to know more about Of BJP and political system of India. During the event, Amardeep Singh Balaggan and Rominder Singh (Moe) Bhatha were inducted as organizational Secretary and Secretary of OfBJP British Columbia Chapter.