A new Oxfam report timed to coincide with the meeting of some of the wealthiest individuals in Davos has brought to light some of the glaring disparities in wealth across the world. The report showed that just 62 of the world’s richest people own as much wealth as 50% of the world’s population. 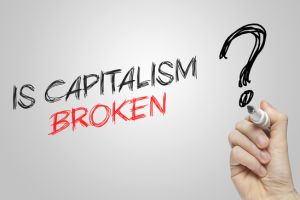 This staggering inequality has increased over the last five years as the poorest 50% of the world saw their combined wealth drop by 41%. The response to this situation is often a shrug of the shoulder and a resignation to the drawbacks of capitalism. This simply is not enough anymore.

Capitalism is a great system. It promotes competition, innovation and increases efficiency and production. It is also a fantastic job generator. However, the system as it exists now is not perfect and to pretend that there is nothing that can be done is just not true.

Redistribution of wealth back into the system is something that must be greatly improved. The first step in this direction would be to get rid of the tax havens that exist, allowing corporations to get away with paying little to no tax on their earnings. Unfortunately though, it seems that political will to make this happen seems to be lacking and will continue to do so until the strong corporate political lobby is dismantled.

There are plenty of indicators that suggest that raising minimum wage directly affects the quality of life of the people at the lowest level. However, this increased burden of minimum wages cannot be put on small businesses. There has to be a distinction between the behemoth corporate earning billions of dollars and small family owned businesses. This line in the sand can be debated upon and arrived to by mutual consensus, however the process must begin as soon as possible. Limiting the amount of money spent on political lobbying and increasing the mandatory contributions towards non-political/not for profit efforts will help bring equal growth to the entire community.

The every ethos of capitalism prevent any ceilings or caps as to how large a company can grow, but a close watch needs to paid to ensure these companies do not become monopolies. As soon as a monopoly is formed, it destroys the level playing field where competition thrives. Newer, smaller companies have no option but to bend to the will of the entrenched corporations and most are therefore bought out or forced out of business.

There has been a trend for billionaires to pledge their personal incomes to philanthropy and various charities over the last few decades. The Bill and Melinda gates foundation is one that comes to mind which is bankrolling noble efforts all over the world. However, is the idea of mandating some amount of social responsibility on corporations above a certain size that outlandish? This amount would a small fraction of the total profit earned and would make absolutely no difference to the bottom line of the company itself, however this money being pumped into school systems, healthcare facilities and public infrastructure would enrich millions of lives forever.

This report should serve as an eye opener to people all over the world that this road we are on is just not sustainable. There is nothing that can justify 1% of the population having 99% of the wealth in the world.

Copyright © 2016 by Aditya Tawatia, All rights reserved. No part of this article may be reproduced, distributed, or transmitted in any form or by any means.