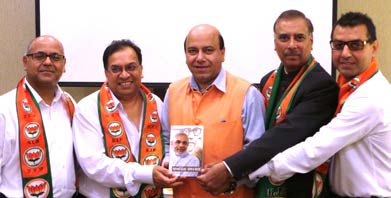 OFBJP delegates from Vancouver, Montreal, Ottawa and Toronto attended the day long meeting at Hilton Garden Inn at Mississauga. Jolly led the discussion on how to strengthen the organization in Canada with elections round the corner and issues like membership, charter and committees to deal with operations. OFBJP Global Convener Vijay Jolly nominated Dr. Azad K. Kaushik as convener of Toronto chapter, Dr. Shivendra Dwivedi as convener for Montreal, Aditya Tawatia as convener for Vancouver and Shiv Bhaskar as Convener for Ottawa. OFBJP Canada chapters have been established with the BJP’s aim of connecting with the global Indian Diaspora.

Jolly told the meeting that people of Indian origin have played a significant role in development of Canada and for close Indo-Canadian friendship and understanding. Today Canada has an Indian population of 1.2 million and excels in the field of medicine, IT, commerce, sports, politics, media, social and cultural spheres. OFBJP Canada shall focus on improving cultural and heritage links between the people of Canada and India, Jolly said.

A book titled Social Harmony by Narendra Modi Chief Minister Gujarat and BJP Convener of Central Election Campaign Committee was presented by Jolly to the newly appointed OFBJP Canada Conveners. All the attending delegates were honored with BJP Lotus color scarves and BJP logo coat pins by Jolly. The delegates had a free and frank discussion on how to contribute for the motherland and assured their full support for the victory of BJP in the coming State Assembly and Lok Sabha elections in India.